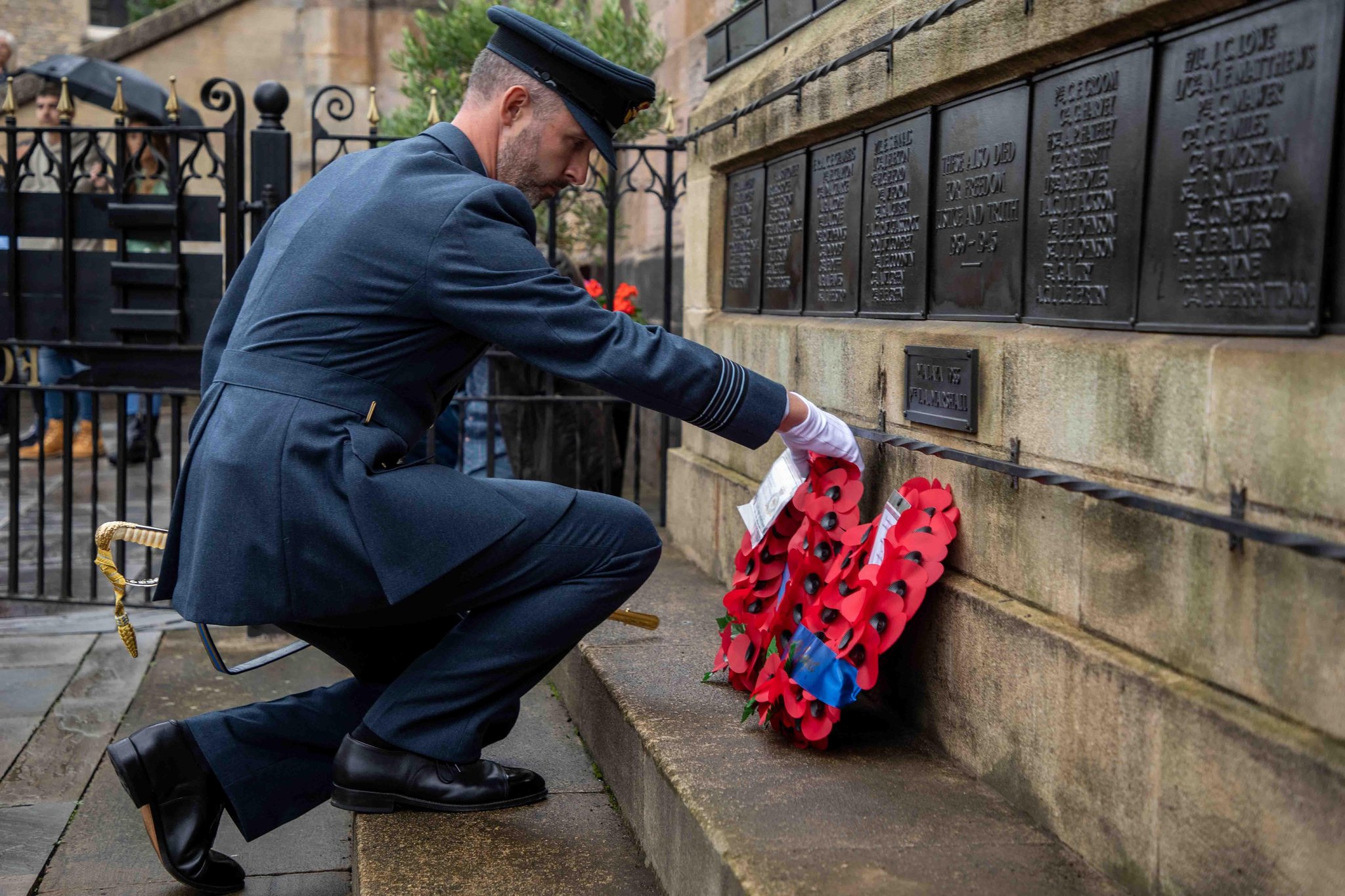 The parade, which also marked the freedom of the town, was held in the centre of Stamford on Sunday.

The mayoral procession left the town hall and made its way through the historic Georgian streets to the United Reformed Church, where a special service celebrated the enduring relationship between the town and the Station.

Pilot Officer Carr said: “Apart from graduation at RAF College Cranwell, this was my first ceremonial event. It was an honour to represent the Station in this way, particularly on an anniversary year, and carry the Freedom Sword, which symbolises our relationship with Stamford.”

Reverend Dr Peter Stevenson led the service in the United Reformed Church. During his sermon, Dr Stevenson spoke of the relationship between Stamford and RAF Wittering, embodied in the Stamford Spitfire, paid for by the people of the town during the Second World War.

RAF Wittering Station Commander Jez Case gave a reading, and there was an impassioned recitation of a special poem on the Battle of Britain by Rob Elks, Stamford’s Poet Laureate.

After the service, hundreds of Stamford’s citizens lined Broad Street, where a series of rousingly familiar tunes filled the air, courtesy of The Band of the Royal Air Force College Cranwell.

An immaculately turned out detachment from RAF Wittering treated onlookers to a flawless display of precision drill before wreaths were laid at the war memorial outside Browne’s Hospital.

Freedom of the Town is an ancient sign of trust given by towns and cities to nearby military organisations allowing them to march through with drums beating, flags flying, and bayonets fixed. It is also an expression of pride for both the Town of Stamford and RAF Wittering.

Sunday’s parade was the first public engagement for Wing Commander Jez Case as Wittering’s Station Commander. He said: “The Battle of Britain was arguably our finest hour, and being able to remember our forebears that fought in the Battle whilst exercising our Freedom of Stamford was a fantastic occasion. Stamford is our hometown, and we are a part of the community, as the community is part of us and whom we serve.

“I hope the people of Stamford enjoyed the occasion, the music and the drill – judging by the reaction of the crowd, I think they did!”

Although flying from forward operating bases, RAF Wittering Squadrons were heavily involved in the Battle of Britain. Additionally, the Station was very active during the Blitz and was the main fighter station for the south east Midlands.

The bond between RAF Wittering and Stamford is of particular importance to Wing Commander Case. He said: “Today we received the warmest of welcomes from the Councillor Gloria Johnson, the Mayor of Stamford, and the townspeople. They have shown tremendous loyalty to the Station over the years. Today we recognised not only the sacrifices made by the RAF during the Battle of Britain, but how Stamford continues to support RAF Wittering today as our personnel deploy on operations all over the world.”