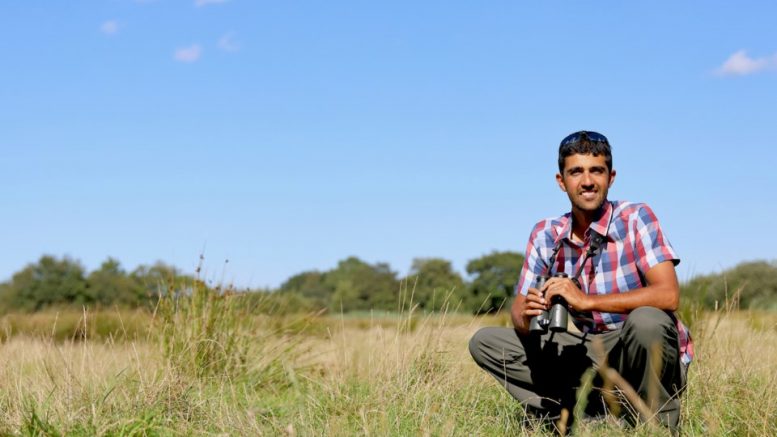 Conservationist and ranger Ajay Tegala will present Inside the Bat Cave on Monday, October 26, alongside Lucy Cooke (of Springwatch fame) and bat expert Professor Kate Jones.

“I am absolutely thrilled to be presenting a documentary about bats”, says Ajay, who grew up in Market Deeping and attended the Deepings School. “I remember the first time I saw a bat, as a child; the excitement of watching it fly so acrobatically. I have been fascinated by bats ever since.”

“So when I got a call from my agent asking if I would like to co-present a programme on bats, of course my answer was an instant yes!”

Ajay was sent to Linlithgow Castle near Edinburgh – birthplace of Mary Queen of Scots – to join an all-female local bat group monitoring the castle ruins: “My role in the documentary is presenting the citizen science angle – how anyone can get involved with their local bat group – and looking at new bat-recording technology being developed. Recording bats in a spooky castle into the early hours of the morning is something I will never forget”.

Enthusing children with wildlife is something Ajay has done for years as a ranger.

He started out as a volunteer at Deeping Lakes (Lincolnshire Wildlife Trust nature reserve) and is currently based at Wicken Fen (National Trust) near Ely, Cambridgeshire. “I have led lots of bat and moth themed walks over the years. Taking youngsters out with a bat detector always goes down well. Giving children these experiences is so important and something I am very passionate about. This year, I have been moth-trapping with my nieces and nephews. They found it fascinating – I hope I am inspiring tomorrow’s naturalists”.

Ajay Tegala, from Market Deeping, will present Inside the Bat Cave. Photo: Supplied

Inside the Bat Cave follows four months in a rare Greater Horseshoe Bat maternity roost in the grounds of a Dorset private school, managed by Vincent Wildlife Trust. “Seeing these bats emerge from their roost at dusk was such a magical experience; watching dozens of them flying right over our heads.”

The hour-long Springwatch-style show features cutting-edge night vision camerawork to reveal the hidden life of one of the moth endangered and least understood animal on Earth.

“Lots of people are scared of bats, but all of Britain’s bats are in fact harmless to humans and are very intelligent. I hope people will watch the documentary, learn a few surprising facts about bats and end up loving and respecting them as much as I do. After all, respecting and conserving our natural world has never been so important.”

Lincoln Road – Part one: Business, policing, and too many gambling sites?