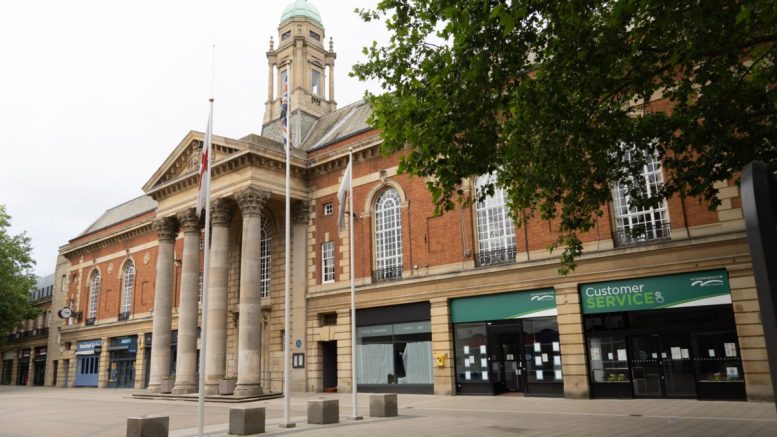 The council resolves to request that the Adults and Communities Scrutiny Committee set up a Task and Finish Group to review: How the council can promote equality and diversity for all councillors including consideration of phasing out the use of gender defining titles.

The council resolves to run a consultation to establish what might be the best way of remembering all of our loved ones and to set up a body representing the bereaved families and public authorities to make recommendations as to the most fitting way to mark the loss of so many.

This motion was AGREED

The council resolves to consider whether to introduce e-scooters with the proper licensing and agreements as one alternative from of transport to the motor vehicle to reduce carbon emissions. This needs to be referred to the next therefore resolves to refer this issue to the meeting of the Growth, Environment and Resources Scrutiny Committee for full further consideration by a Task and Finish group who will make a recommendation to Cabinet.

The council resolves to establish a new COVID-19 Peterborough Citizen’s Award scheme in order to recognise and honour the amazing contribution and sacrifices made by some of the citizens of our city during this pandemic, which has affected so many lives.

The council recognises how important heritage, museum, library, leisure, sports, summer activities, and arts facilities and services are for the city council and its residents. Council believes is clear that we need a long-term plan to secure such services and with the current situation in relation to Vivacity the council should is exploring all options; this including direct provision, working with partners, the creation of a new Arts and Leisure Trust, and the establishment of a co-operative to deliver these services. Council instructs confirms that work to directly deliver and, re-open such services is progressing, set up summer schemes and explore establishing a co-operative is progressed as a matter of urgency.

Council supports Natural Cambridgeshire’s aim of doubling the area of land managed for nature across Cambridgeshire and Peterborough by 2050 and in particular supports the John Clare Countryside project, which aims to create, launch and deliver an ambitious and accessible nature recovery area across the landscape areas to the west of Peterborough.

Council: Congratulates City Council staff, NHS and social care staff and all volunteers who have worked so hard in managing the COVID-19 crisis in Peterborough;

Believes that decisions on management of any future outbreaks of COVID-19 and any local lockdowns or other measures to deal with such outbreaks are best made locally here in Cambridgeshire and Peterborough;

Asks the Director of Public Health to write to Peterborough’s members of Parliament urging them to press the Government to delegate the necessary powers to Cambridgeshire County and Peterborough City Councils to enable any such decisions to be made locally in future.

The Council resolves to: Create a Food Strategy to address the causes of food inequality in Peterborough for implementation during the 2021/2022 municipal year. In order for this to happen, the council will:

Identify ‘food champions’ within the council to lead the project:

Identify a lead partnership organisation and apply for funding to develop the strategy, action plans and projects:

Create a network of food partnership organisations and consult residents to contribute to the creation of a ‘Food Action Plan’ o Prioritise those with least access to healthy food:

The Council will endeavour to encourage the production of food locally and support the sale of such produce.

Council notes: There are a number of recycling banks across the city, these banks are supplied and operated by a number of different charities and companies;

They are well used by residents and become full fairly often. This can lead to donations being left around the outside of the bank, with the potential for this to be spread around the area in high winds. Technically this practice is considered fly tipping and should be discouraged;

Currently if a member of public report full banks via ‘FixMyStreet’ or the council’s own website they are told that the council doesn’t operate these banks and for the resident to contact the owner of the bank to get it emptied.

Identify all the banks across the city, to create a register so that when the council has a full bin reported to it, the council will email the operator of the bank to get the bank emptied;

Require, where possible but certainly encourage, the operators of recycling banks to place contact details for reporting full banks to, by phone and/or email;

Require, where possible but certainly encourage, the operators of recycling banks to place warnings that putting donations around the bank is fly tipping and they might be issued with a fine, if caught.

The motion was AGREED.

The council notes that:

No fault evictions, introduced under Section 21 of the 1988 Housing Act, allow landlords to evict tenants, without having to give a reason, once the term of the tenancy has expired;

80% of England’s 11 million renters are on tenancies with fixed terms of six months or a year; after this period has ended, landlords can evict their tenants under Section 21 without cause;

Research published by Generation Rent indicates that Section 21 evictions are now the single biggest cause of homelessness in England;

And that in 2017, Scotland made tenancies indefinite and banned no-fault evictions under the terms of the Private Housing (Tenancies) (Scotland) Act 2016.;

And in 2019, the Government launched a consultation on repealing Section 21 and reforming the eviction process in England, to which this Council responded in full support.

This Council believes that:

A tenant should not be evicted from their home without good reason;

Tenants should have more stability, avoiding the need to make frequent moves at short notice and enabling them to put down roots and plan for the future;

Landlords should be able to regain their property should they wish to sell it or move into it themselves;

Tackling homelessness, which should be a priority for government at all levels;

The Government should bring forward its legislative proposals as soon as practicably possible.

The council resolves to write to the Secretary of State for Housing, Communities and Local Government to reiterate its support for these reforms and urge him to respond to the consultation and introduce legislation in this Parliamentary session.

Note: Motions 1-4 were fully debated and considered by Full Council; motions 5-10 were not debated or considered, and were only voted on. This was because of the rules covering virtual meetings protocol allowing only three hours for a Full Council meeting and the meeting had already passed the three-hour maximum.

Poll Results: Should climate change be a priority in government Covid-19 recovery plan?

Operation to end drug violence leads to 26 arrests in Peteborough

Be the first to comment on "Council motions include Covid-19 citizens award, e-scooters, and food strategy"