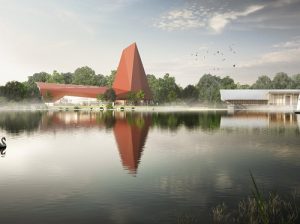 Work has began to turn plans for an Olympic-grade Climbing Wall and activity centre at Ferry Meadows into reality.

Bosses at Nene Park Trust say its project team is beginning to put together detailed designs for the Lakeside Activity Centre which will have a 34.25 metre high Climbing Wall as its focal point.

The facility will be an all year-round, all-weather indoor activity centre that will feature one of the country’s largest Clip ‘n Climb arenas suitable for all ages and an Olympic- standard climbing facility.

There will also be a natural-themed indoor toddler play area, an additional café and private hire spaces for community groups.

The centre is expected to create 31 jobs and to generate £2 million a year for the city’s economy.

Plans for the centre, which will be sited on the current car park at the watersports centre on the edge of Gunwade Lake in Ferry Meadows secured the go ahead from Peterborough City Council’s planning committee by 10 votes to one.

A spokesperson for the Trust added: “Now that the planning application has been approved the project team can start working on the detailed designs.  “It is hoped that initial work can start later this year.”

Construction will begin on the new 225=space car park area must be completed first.

The time scale for the construction of the centre will depend on the agreement and approval of detailed designs with the council’s planning officers.

It is unlikely that any works will start until after the summer.

The trust has also confirmed that the centre will cost £8 million to build, which will include £1.5 million from the Towns Fund.

The spokesman said: “The project is expected to cost £8 million

“The Towns Fund board has allocated around £1.5million.

He added: “The Trust intends to announce more details after all conversations have taken place following the committee’s decision.

“We expect to be able to confirm details as the project moves into its next build phase.”

Under the Towns Fund, Peterborough will receive £23 million from the Government to help fund 10 projects, which include the Lakeside Activity Centre, to revitalise the city.

Matthew Bradbury, chief executive of Nene Park Trust, is also the private sector Chair of the Peterborough Towns Board.

Minutes from the board’s meeting show Mr Bradbury has declared an interest during discussions involving the centre.

In 1897 when Queen Victoria celebrated her diamond jubilee neither her nor her loyal subjects thought anyone would ever reign longer. Peterborough Telegraph Lifestyle …

What: Sacrewell’s Eggstravagansa When:  From 9am until 4.30pm from April 2nd until April 18th 2022 Where: Sacrewell, Thornhaugh, Peterborough, PE8 6HJ  …