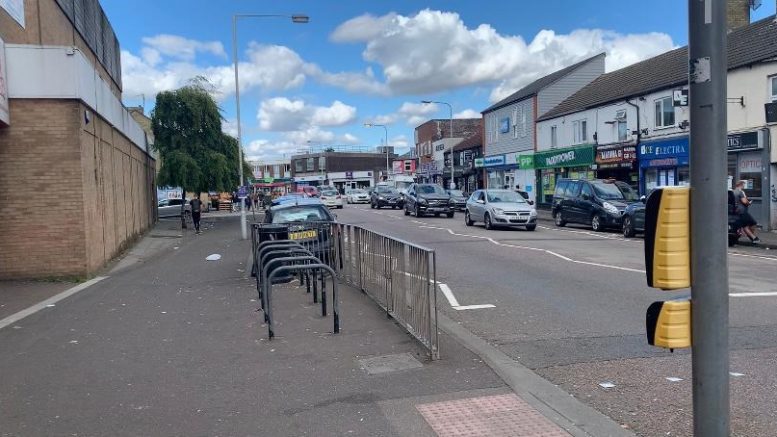 Ask members of the public what they think of it, and you’ll get some very varied responses. Some love the vibrancy and chatter, and the convergence of many different communities and nationalities. Others are less complimentary, and avoid the area altogether, as commenters in our social media pages will often detail.

The area has seen little investment in recent year for a variety of reasons, and we will look at this in more detail later in the week. Meanwhile, the road has ongoing problems, and a few fresh ones.

Members of the public have raised concerns of open drug-dealing, drug and alcohol consumption on the streets and speeding as some of the issues, but the latest complaint concerns an increase in betting shops finding a home on the street, with a sixth shop opening in just the last few weeks.

Millfield resident and business owner Mohammed Saeed who also works for Community First, a voluntary organisation, accompanied Peterborough Matters on a walk along the street.

Saeed regards the area as one that most communities regard as “the place to go”, in preference to the city centre. He said that he knows many people of all races who are comfortable in this area, and those who aren’t “are bigots with a resentment of everyone foreign, and you get that everywhere. It’s a vibrant place with things that go on underneath.”

That said, he recognises the issues on display. There is a well-known drugs issue, with dealers commonplace. And they are hard class A drugs like crack and heroin – destroyers of lives and communities.

Saeed said: “Every now and again we also get the needles – heroin addicts looking for a quiet space.

“Before Covid we picked up 150 needles from Bright Street to the Triangle, along Bourges Boulevard mainly. Normally I would take them to the pharmacy in yellow bins to destroy them, but what I really wanted was a reminder to the public of what the situation is. We are working on a piece of art on display, with the stories of people who have been victims of drug abuse and addiction and share those stories to help them. We do a lot in the city to help the homeless here – there’s food, clothing, housing.

“But the addiction is far greater than that – put an addict in a house and they won’t be spending their money on rent. I’m working with people who are addicted and taking them to Aspire, for a prescription to help them. The problem is that it only affects the heroin, and they’re also taking crack. There’s no substitute for that and they will come back to it.

“Because there are so many dealers they alter their prices, and they are targeting kids at a young age to start supplying. We had an issue at a school in Peterborough where kids were collapsing. They thought they were using THC (cannabis oil) but they weren’t – they were actually being sold Spice in little bottles, which can be used in e-cigarettes. The kids were collapsing after two puffs.”

He says more needs to be done to tackle these concerns with a prominent police presence, something the area desperately needs, which can help work as a deterrent.

He said: “We don’t have a police presence here. It’s finished. The traffic police come here most evenings to give tickets out for not wearing seatbelts and stuff.

“We used to have a whole team of local police officers from sergeant to PCSO – and the only person who remains, loyal to this area, is the PCSO. He works a shift pattern. Cambridgeshire Constabulary decided it was going to get rid of local policing, and this area was known as Op Can-do ten years ago, but that project has finished.

“They don’t know the people, and what’s going on. They don’t know the locals and who’s getting up to what. There used to be Sgt Keith Price and PC Chris Baker, who’ve moved on – they knew where the good and bad spots were. There was trust then.”

In response, Cambridgeshire police said that Lincoln Road is an area of priority for them where they conduct regular patrols and are doing their bit to keep the area safe.

A spokesperson for Cambridgeshire Police said: “Lincoln Road is an area of priority for the Eastern team, with PCs and PCSOs aligned to this area specifically and patrols regularly conducted.

“The area sergeant is also in regular contact with the local councillors about concerns and issues raised, and is working with them to improve community links and information sharing between the constabulary and the locally elected officials.

“Over the past few weeks we have made several arrests in the Millfield area with regards to drug supply, and local officers are working with our proactive teams to develop the intelligence required to do more of this as part of our Op Spotlight initiative tackling drug-related crime.”

When the lockdown was instated in late March, the area was highlighted as one where social distancing wasn’t really taking place, although it was clearly not the only area guilty of this.

On this, the police said: “Where Covid-19 is concerned officers will engage with people breaching restrictions, explain the situation and encourage them to comply with the guidance. Enforcement is last resort, but is an option for blatant breaches or if people refuse to comply.

“We have to assess each incident, both Covid and non-Covid, as to its level of threat, harm and risk, and allocate resources accordingly to ensure that we are using our limited officers in the most effective way possible to reduce the harm occurring in our communities. We are working with our partner agencies to manage our Covid response, and urge communities to be vigilant themselves and report issues when they see fit. We all have a personal responsibility to reduce the spread of the virus and ensure that police enforcement is used only as a last resort.

“It is vital people report incidents of drug dealing, anti-social behaviour or other suspicious activity they witness. This helps us to build an accurate picture of what is happening in the area and influences our patrol plans.

“People can report incidents, and Covid-19 breaches, on our website www.cambs.police.uk/report or via our webchat service; alternatively call 101. If a crime is in progress always dial 999.”

Apart from drug-related crime in the area, there have been complaints of a rise in gambling outlets finding a home on Lincoln Road as well, with yet another new recent addition.

Saeed questions why these shops are being given the licence to operate in an already-deprived area: “We’ve seen a lot of gambling outlets in the past few years. In this little stretch we have six.

“We now have a 24-hour slot machine company that has opened up. I believe it’s the multinationals praying on the vulnerable. This is one of the most deprived areas in Cambridgeshire and you have these outlets. It’s asking for trouble. I’ve read data from the gambling commission and the BAME community are more likely to be problem gamblers.

“But my concern is that the people who issue the licences are those who we vote to look after us? The planning committee at PCC’s aim is to make sure this doesn’t happen. Gambling is a legitimate business but the impact of it on communities, the health care system, all builds up – and we’re relying on the NHS to take care of it.

“I know of local families that have had to run into bookmakers and pull out loved ones because they’re gambling away all their earnings. If you’ve never been addicted to it you don’t know what it’s like – it’s almost as bad as crack and heroin – you’re after that  fix.

Peterborough City Council said they haven’t received any complaints yet regarding these establishments.

A spokesperson for the council said: “Licensing Authorities are required to uphold the statutory aim of allowing gambling and as such applications for gambling premises licences must be granted unless there is clear evidence that the licensing objectives are undermined.

“Furthermore, the Council must consider any applications for a gambling premises licence in line with its priority for driving growth and economic development in the city and must therefore give consideration to the fact that gambling premises are a source of employment in the areas which they operate.

“Prior to the application for a Bingo premises licence being granted, the Council issued notice of consultation to the relevant Police, Fire and Planning Authority, Environmental Health, Revenue and Customs, Ward Councillors and others in June 2020; inviting them to make representations.

“In addition, a notice of the consultation was placed at the premises to allow the public and other interested parties to respond. No representations were received and there was no evidence to show that the licence objectives were undermined. As there was no evidence base to refuse the licence application, the Council had no option but to grant a Bingo premises licence.

“The premises have been visited by a Regulatory Officer and no concerns have been raised. To date, the council has not received any complaints with regards to the premises, or the behaviour of its patrons.”

Conservationist’s TV show will take us Inside the Bat Cave

Poll Results: Have you been able to book a Covid-19 test?

Be the first to comment on "Lincoln Road – Part one: Business, policing, and too many gambling sites?"