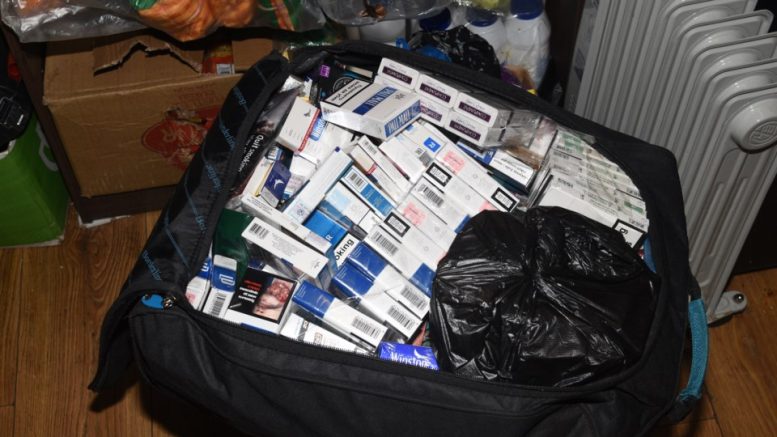 Saade Jabar, 38, first came to the attention of officers on April 5 last year when he was seen acting suspiciously in the courtyard of a shop in Huntley Grove, Peterborough.

The officer, who was carrying out an unrelated drug warrant at a nearby address at the time, saw Jabar through a window moving a laundry bag full of cigarettes and hiding them under a tarpaulin.

The officer then walked into the shop to see Jabar behind the counter serving customers and arrested him on suspicion of conspiracy to commit fraud against Her Majesty’s Revenue and Customs (HMRC).

A search of the newsagent shop revealed non-taxed cigarettes for sale in the kiosk and hidden in suitcases, boxes, bags and laundry bags in the property’s stockroom and back yard.

A van found outside the shop, registered in Jabar’s name, also contained another three large boxes of illegal cigarettes. A subsequent search of Jabar’s home in Dean Crescent found £3,500 cash and a child’s racing bed also stuffed full of cigarettes.

A total of £89,651 worth of illegal and untaxed cigarettes were seized as a result of police searches.

Then, on November 2, whilst on police bail, at about 10.20pm, a road policing officer was driving an unmarked car along Vineyard Road when he was passed by a Volkswagen Caddy van.

The officer followed the car and brought it to a stop in London Road where he spoke to the driver who identified himself as Jabar.

Jabar presented the officer with all of his documents, but his behaviour suggested he was attempting to prevent the officer from searching the van.

When the officer asked whether he had counterfeit goods inside the vehicle, he became wary and tried to walk into a nearby shop.

The officer opened the back of the van and unsealed one box to find cigarettes. As he attempted to arrest and handcuff Jabar, he resisted. Jabar then tried to get into the van and make off, striking the officer in the chest whilst doing so.

This caused the officer to let go of Jabar’s arm which resulted in him making off in the van. But the officer pursued Jabar and managed to box him in at a set of traffic lights nearby.

The piles of boxes within the van were seized and HMRC subsequently calculated the tax and VAT avoided through the illegal import of the cigarettes and tobacco was £76,741.

Jabar admitted two counts of carrying chargeable goods intending to defraud Her Majesty, assault by beating of an emergency worker and dangerous driving.

He was sentenced to 38 months in prison at Peterborough Crown Court on Tuesday, September, 29. He was also disqualified from driving for 31 months.

PC Paul Nisbet said: “Jabar attempted to avoid paying a significant sum of money to Her Majesty’s Revenue and Customs for his own financial gain by selling on illegally imported cigarettes and tobacco. He was even willing to assault an officer who was simply doing his job to avoid getting caught.

“I am pleased he will now face time behind bars for his actions.”

Peterborough man has been jailed for 38 months for evading tax after illegal cigarettes were seized (Picture: Cambs Police)

Be the first to comment on "Man jailed for tax evasion of over £150,000 after illegal cigarettes seized"