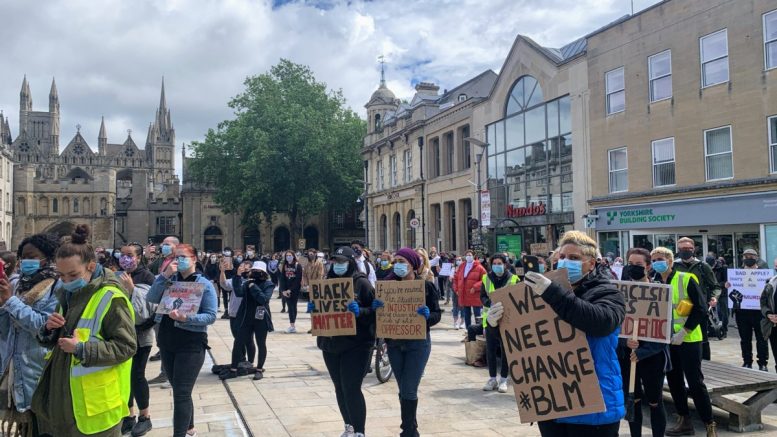 With 57 councillors online, the vote was counted as 29 members in favour, 28 members against; so, the motion was agreed by just one vote.

Cllr Amjad Iqbal proposed an amendment to the wording of Cllr Wiggin’s motion, and this too was approved by a majority of one.

The full wording of the agreed motion as amended states: “October is Black History Month. There are ongoing global protests about racial inequality throughout the world.

“Peaceful protests in support of Black Lives Matter have been held in Peterborough and throughout the UK. Covid-19 is disproportionately impacting black and ethnic minority (BAME) communities, according to a report from Public Health England.

“Around two thirds of healthcare staff who have died as a result of COVID-19 are from a BAME background whereas they make up 20% of the overall workforce.  Police figures on Stop and Search in Cambridgeshire show that BAME communities are disproportionality targeted.

“The Council believes:  Racism in all forms, both structural and in individuals, continues to be a serious and often unseen problem in the UK.  Peterborough has a good track record when it comes to community relations. Although progress has been made in combating racism, work to eradicate it entirely is far from complete.

“This Council, representing people in Peterborough, has a duty as a public leader to actively lead that work.

“The Council resolves:  To restate its condemnation of all forms of racism and hate in all its manifestations. To restate its aim, to oppose racism and hate against all communities, in keeping with our commitment to eradicate all acts of hatred on grounds of age, disability, gender reassignment, marriage and civil partnership, pregnancy and maternity, race, religion or belief and sex or sexual orientation.

“To reaffirm the Council’s support for the annual events in Peterborough celebrating Black History month. That the relevant scrutiny committee convenes a Task and Finish group to review barriers to equality on grounds of race, which will include:

“Reviewing and examining the City Council structure to ensure ethnic minorities are not disadvantaged. Understand specifically how many BAME we employ, where are they working, what barriers, if any exist to their career progression and whether a ‘name blind’ recruitment process would aid in the recruitment of more BAME staff. Reviewing the evidence, provide recommendations to Council and devise a set of KPIs and a challenging outturn for us to achieve this.

“BAME access to housing and to homelessness and welfare support are important parts of the council remit.

“Group to review and recommend concrete actions on how we adopt an actively anti-racist outlook within areas where we have influence by reviewing our corporate policies so that anti- racism is explicit and not implied; by routinely calling for transparent reporting and continuous monitoring of the impact on the BAME community: and if any other meaningful statistics that can be monitored regularly can be produced.

“Review council Equality policies and recommend if any amendments are required. Encourage Peterborough schools to include BAME history and culture in lessons, including providing further historical context for events normally only seen through the lens of white British history.”

Boxing: No Thrills but conclusive win for Jordan

More than 10 rape suspects have been arrested and many more questioned in a week of action from Cambridgeshire Constabulary’s Rape Investigation Team. Peterborough Matters…

Most areas in Peterborough have seen a fall in Covid-19 cases over the previous week. Peterborough Telegraph…