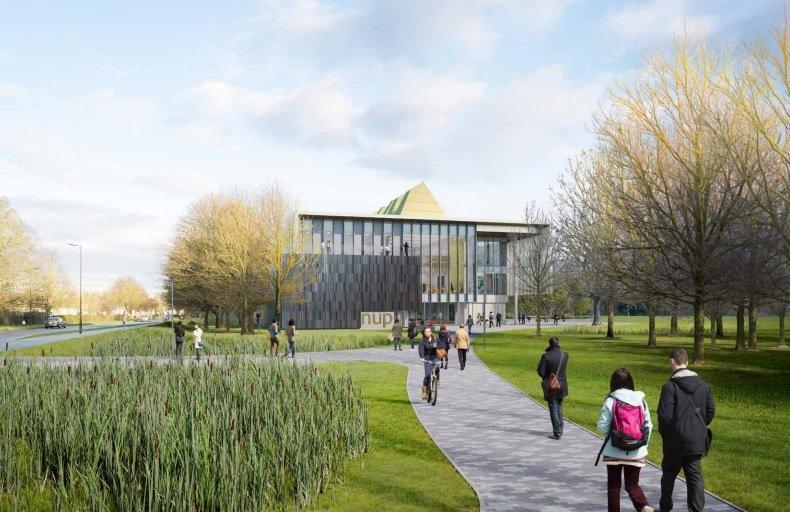 A few weeks ago the Peterborough Telegraph analysed the Full Business Case for the university, which revealed that:

. Students will register with Anglia Ruskin and receive a degree from it until at least 2030 as the centre will not have its own degree awarding powers before then

. A review will be held in 2028 to decide whether the university should become independent of ARU, with the expectation that it becomes fully independent in 2032 – seven years later than originally planned

A view of the new campus from Bishop’s Road

. The anticipated number of students is lower than originally expected, reaching just over 5,000 by 2028 compared to the original target of 12.500 by the same date

. The university will lead the recovery from the coronavirus locally

. The proposed curriculum “deviates significantly” from what was originally anticipated, with a much higher percentage of students on campus

A landscape plan for the uni campus

. The university is only expected to make a tiny profit each year, despite having a very low budget for maintenance works

. Covid-19 provides a number of risks and opportunities, both in terms of student numbers and encouraging people locally to sign up

. The university will only open on time in 2022 if there are no further delays in the current process

. Ambitious plans are in place to team up with an ‘Innovation Partner’ to significantly boost business growth in the region

. The university will be crucial in fuelling the coronavirus recovery locally, with a series of workshops having already taken place on how to respond to the pandemic

In early August, a planning application for the new ARU Peterborough campus was submitted to Peterborough City Council for approval.

The campus is set to be built largely on the Wirrina Car Park on Bishop’s Road. It will, according to the plans, be a “three-floor, state-of-the-art learning, teaching, administration and support building”.

One of its main qualities will be its environmental credentials (which is key in a city aspiring to be the UK’s Environmental Capital), with solar panels on the roof and recycled material used where possible.

However, when the plans for the campus were put out to public consultation earlier in the year there was a mixed response.

While many were thrilled to see the university finally progressing after many years of aspiration, others were less enthused.

“No private interview rooms for tutorials, meetings or one-to-ones. No space for staff to do their research. No lab space (bioscience, agri-tech, engineering, computing) shown on the plans.”

The response was: “The building has been designed to ensure flexibility in uses to allow for changes to delivery and teaching spaces. The university will focus on working with industry, young professionals and mature students in the area.

“As a result, the majority of students will be based off campus and will study through virtual learning environment, podcasts and webinars.

“Given the limited space available on campus, the vast majority of students will be enrolled on part-time courses or vocational courses, with very few attending full time.”

The consultation comments and responses also revealed that there will be no student accommodation at the new campus. “It is anticipated that the pool of students will live relatively locally and will commute to the university rather than relocate,” it is stated.

One of the most striking elements of the campus when artist impressions of the building were first revealed were the ”pyramidal lanterns” on the roof.

It is suggested that they will “give the building a strong, identifiable skyline and enable the heart of the building to be naturally ventilated and daylit. The building will provide a strong identity for the new university”.

Intriguingly, one person asked: “Will this simply be a campus of another university?”

The response was: “The proposals are for a new University of Peterborough, the proposal will not be a campus of another university.”

Since that time, it has been revealed that the university will be a branch of Anglia Ruskin University until at least 2032 when it is hoped to gain independence.

One change which has come following the consultation event was an increase in the “useable floorspace” within the building, meaning it will now be extended to the south and west.

This decision was made following discussions with Anglia Ruskin.

Part of the planning preparation was to discover whether the campus will visually impact significant local landmarks, most importantly the cathedral.

The planning application reveals that there is “very low level of harm potentially arising from the co-visibility of the cathedral and the new university building in long-range views from the Embankment to the south and Frank Perkins Parkway to the east”.

But it adds: “It is anticipated that the proposed development will, at most, cause negligible, less than substantial harm to the heritage significance of Grade I Listed Peterborough Cathedral through change to setting.

“This very low level of harm to the designated heritage asset should be weighed against the public benefits of the proposed development.”

It is also stated that there will be no impact on the wider Cathedral Precincts or Lido.