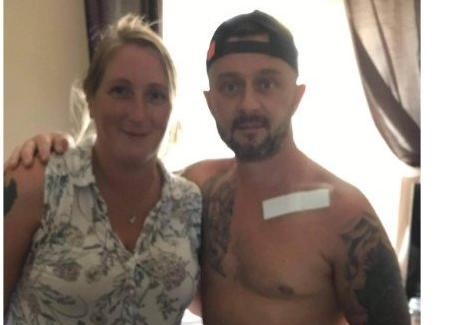 Vicki and Paul reunited after the incident in July

The incident happened when Paul (34) was riding his motorbike along the A47 near Thorney on July 3 at around 9am and collided with a white van.

Emergency services, including the Air Ambulance, arrived and Paul was taken to Addenbrooke’s Hospital in a critical condition.

First on the scene, however, was Victoria Hales (40) who was a few cars further back, on the way to drop one of her daughters off at a friend’s house.

She said: “I saw him go past me just before it happened, not at high speed and I remember thinking what a polite biker he was. As soon as I saw the accident, I parked up the car and jumped out to help.

“He was conscious but was face down. I laid down next to him and kept talking to him, while checking for a pulse.

“Being in that situation felt like being on a movie set, faced the reality I stopped in my tracks.”

While staying with Paul, others arrived on the scene, including a nurse named Gemma and a couple of soldiers, both of whom haven now flown out to Afghanistan.

Together, the group managed to turn Paul over and the two soldiers, performed a version of CPR usually only used on the battlefield to push Paul’s heart back into place.

When the emergency services arrived after around 10 minutes, Paul was taken to hospital and Vicki was left wondering about his fate.

She added: “I had to continue on my journey, but I was consumed by the thought ‘is he alright?’ I have no memories of that journey; I just was desperate to know how he was.

“I gave my statement to the Police, but I couldn’t get any information from them or the hospital. The next day was a bit of a blur and I don’t think I ate or slept for five days.”

While Vicki was waiting for news, Paul was in a coma and was diagnosed with a series of injuries including three shoulder fractures, a fractured skull, three bleeds on the brain, a fractured spine, two fractured eye sockets, broken ribs and the loss of function in one lung.

He awoke after just under three weeks but was unable to have visitors due to Covid-19 restrictions. Family and friends received updates via live video.

It was also due to the power of the internet that Vicki was able to reconnect with Paul.

She said: “I remember coming across a fundraising page that a friend of mine had shared on Facebook. I asked her for more details, and she confirmed that it was in aid of the same man I had helped and in fact, she knew his mum.

“It was great that I was able to get in touch with them and get access to the video updates of his condition.

“Watching them became a routine, I made sure nobody disturbed me, which isn’t always easy when you’re a single mum to three girls but I felt so lucky to be able to find everything out because he could have been from anywhere and I might not have heard from him again.

“The power of social media is amazing.”

Vicki was able to meet Paul’s family face-to-face on August 2 at a ride-out, starting in Wansford, in his honour, over 200 bikes attended the event.

Paul returned home to his wife and four children in August but still suffers from pain and has to take a range of tablets to keep him alive.

He has had to take time off from his job as a HGV driver as he learns to walk again and deals with all of the after effects of the accident, including memory loss.

He said: “I feel like a completely different person, I can’t compare myself to who I was before. I’ve got hundreds of pictures from holidays before the accident, but I couldn’t tell you where any of them were.

“I don’t care about money or possessions though. I’ve got my life and that’s the most important thing. I feel as if I’ve been given a second chance.

“The top half of me was dead at the scene, a pulse had to be found in my groin and that’s the last place before it goes completely.

“I’ve had Police officers tell me that they can’t watch the full video of the crash because it looks too bad and I’ve had doctors and surgeons tell me they can’t believe I’m alive.

“All I can explain it as, is that god didn’t want me yet, I’ve got a second chance at life and a job to do down here.”

“I can’t work at the moment though, which is a shame and in fact, I’d only ridden that bike three times.

“I got it fairly recently and the weather at the time wasn’t great, so it didn’t see much action. I had spent seven hours cleaning it though and I remember one of the Police officers telling me he could eat his dinner off the engine.”

With Paul’s recovery progressing, he has been able to reconnect with the people who helped save his life. He has remained in contact with all four who were at the scene and was able to meet Victoria at his home in Dogsthorpe last month (August 20).

He said: “I cried when I saw her, she was there for me when I was potentially taking my last breath.

“She laid with me the whole time after she found me and I remember her shouting to get help and it’s great that I have been able to keep in regular contact with her since.

“All four of them that helped me that day are my heroes. I have no idea how you go about thanking them for what they did for me. Words are not enough.

I’m bad enough at buying presents for people on their birthdays and at Christmas, what do you get someone that has saved your life?

“I’m more than thankful, I genuinely love them because I owe them my life.”

Vicki added: “I was a bit nervous to see him at first, but I mostly felt lucky. He’s doing so well and it turns out we both love our karaoke. We have future meet-ups planned and hopefully we can arrange a sing-song together in the future.”