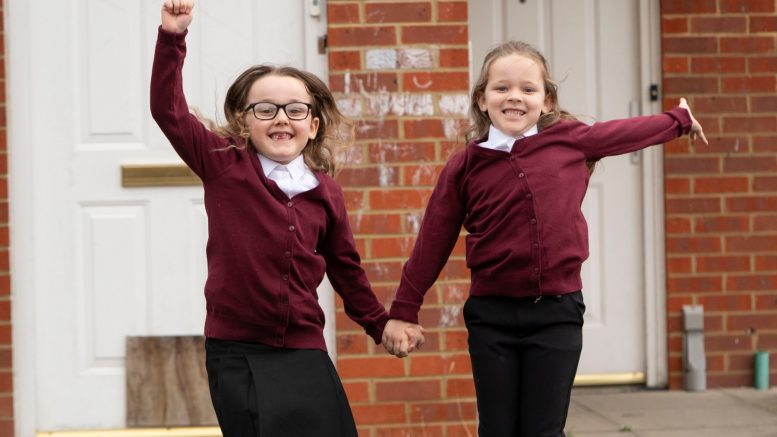 Kirsty-Lea Abbott-New, from Peterborough, won the Tesco doorstep portrait competition, a prize which offered the chance to be treated like royalty and have children’s back to school portraits photographed by David Levenson.

Levenson is renowned for capturing portraits of The Royals, including Prince William and Harry, on their first day of school.

It was hoped the prize would bring some excitement to what has been a very uncertain summer.

Kirsty-Lea said: “We were so excited to have the girls’ portraits taken by David Levenson. They were a bit apprehensive about going back to school so these portraits made them excited about returning to school and helped to capture the special moment.”

While some parents remain concerned about their children returning to school, half of those surveyed in the East of England said their children were excited about getting back to the classroom, and 40% said they were eager to wear school uniform again, according to Tesco.

Half of the parents questioned said ‘I will miss having my child around the house as I’ve loved being able to be around them more than usual’, higher than the national average of 41%.

The research also revealed that more than three quarters of parents in the East of England (81%) commemorate the occasion with a photo of their children wearing their school uniform and over half of parents (54%) from the region think it’s more important than ever to mark the occasion this year.

To help capture the smiles for the big day, Levenson has shared his top tips which include:

Are your children returning to school this week or next? Share your ‘first day of school’ photos with us via email and we will use a selection in an online gallery

Parkways improvements scheme vital for jobs and growth in Peterborough

Coronavirus: Celebrities and influencers to appeal to young people in Cambridgeshire