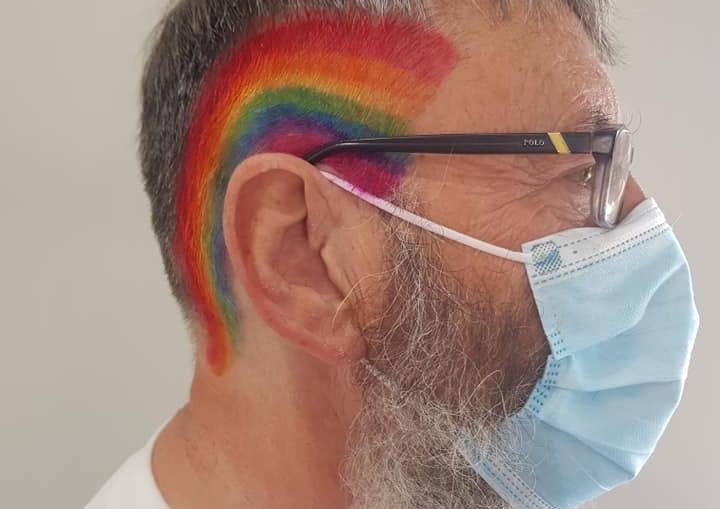 Frank with his new hair style

Frank Hughes (67) of, The Gannocks, Orton Waterville, climbed mountains on his staircase – and made a colourful change to his hair style, for the hospice.

While most people stuck to their one hour of daily outdoor exercise, Frank climbed for several hours matching the height of mountains and peaks across the UK from the comfort of his own home.

No stranger to a hike, Frank usually goes away with friends on climbs. With his slippers strapped on, Frank set off on his first ascent of Hellvelyn in the Lake District. Though from some slippery moments, Frank now climbs his stairs in his walking boots- as they’re far more comfortable!

Noting the ‘views weren’t great as it was raining’ Frank continued each week to climb a new peak. ‘Travelling’ on to Mount Snowdon in Wales, Ben Lomond in the Scottish Highlands and Carrauntoohill in Ireland- where sadly for Frank no draught Guinness was available.

Suffering with a fracture in his right foot, while walking his dog at Orton Longueville Woods, Frank had to take six weeks rest, before starting again with lower peaks. Clocking up over 2,146 flights of stairs and 5,328 meters so far, Frank isn’t stopping there wanting to finish on a high with Ben Nevis which he estimates will take around nine hours.

Having helped fundraise for Sue Ryder for over 17 years, Frank fundraises in memory of his beloved wife Sue who spent time in Thorpe Hall hospice. Originally only aiming to raise a few hundred pounds. Frank was ‘amazed’ to have raised £1,300.

He said: “My time with Thorpe Hall goes back to 2003 when my wife had cancer, which began in 2001. She was in and out of Thorpe Hall from January to November. Since then, whenever there has been that chance, when I can, I do things to help out. Especially at times like now, I saw their emergency appeal and it’s important to me as I’m aware of all the fantastic work that they do. They’re going through a really hard time at the minute with so many fundraisers cancelled.”

Frank’s original plan to raise money was to let his beard grow and dye it rainbow colours when he could see his grandchildren again. However with the weeks passing by, Frank felt a more physical challenge would be a great way to stay active, while raising more funds.

Now he has been reunited with his treasured grandchildren Isiah Mason (8) and Nevaeh Mason (7), it also meant it was time for a new look! Due to government restrictions, dying Frank’s beard wasn’t possible, so innovative hairdresser Gina Barnes, The House of Hair, took the rainbow to the next level, by creating rainbows framing Frank’s face around his ears!

Embracing his new look, Frank has admitted to having some ‘funny looks’ from some people in public but loves the new style, which will last for around 6 weeks!

Frank said: “You get different reactions, so smiles and laughs and questions from those who are interested! Though I have had some people give a funny look, it’s all for a good cause. I’ve always said I was too old to be a punk but too young to be a hippy, this haircut is the closest I’ve ever been to being a punk! Isaiah really likes it but Nevaeh isn’t too sure about it yet!”