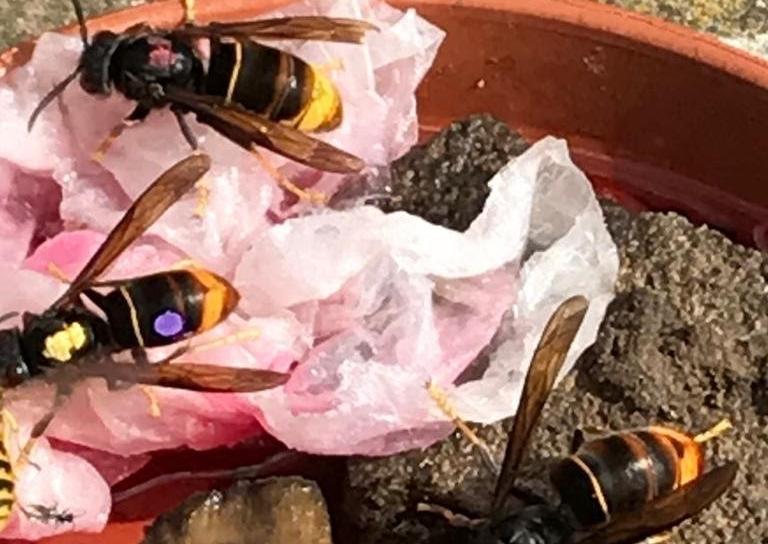 The Asian hornet can easily be distinguished from a wasp. They have large jaws that can rip apart honey bees.

Beekeepers across the region are on a mission to save local bees from the invasive Asian hornet, which threatens to wipe out hives and other insect life across the county if it spreads across the Channel from mainland Europe.

Beekeepers in Cambridgeshire and Lincolnshire, are calling upon residents to be vigilant when out and about and look for Asian Hornets and their nests during Asian Hornet Awareness Week which is running from Monday (September 7).

Helen Kirk, a Cambridgeshire member of the British Beekers Association who lives in Wisbech said: “I understand it can decimate a beehive in days.

Beekeepers dealing with an Asian hornets nest in Jersey.

“As a beekeeper they are very bad news.

“They are the sort of thing that people wouldn’t know what it was if they saw one. They are very big, very yellow and very unpleasant looking.

Captured – an Asian hornet on Stewart Maher’s trip to Jersey.

“It’s important people report sightings to the British Beekeepers Association so that any nest can be found at the earliest opportunity. Beekeepers will try to find the nest so that they can be dealt with before they become too established.”

Stewart Maher, a Lincolnshire beekeeper who lives just outside Sleaford, and has a small apiary of about 15 hives just between Sleaford and Grantham is one of the region’s co-ordinators of the campaign.

He last year travelled to Jersey to track and trace the hornet after they spread from France to the Channel Islands due to rising temperatures from global warming and he is passionate about tackling this threat which could endanger crops if bee colonies collapse.

The incredibly destructive Asian hornets specialise in preying on honey bee hives. The hornets ‘hawk’ the front of bee hives, killing the bees, ripping them apart and feeding them to their young. One Asian Hornet alone can kill 60-90 honey bees per day, and dozens of them will ‘hawk’ a hive simultaneously decimating the bees, meaning it can be destroyed or irreparably weakened to the extent it cannot survive.

Stewart Maher helped to track and destroy Asian hornet nests like this one.

Stewart said: “The Asian Hornet is one of the biggest threats to our bees. It goes without saying that due to global warming, intensive farming and less flora and fauna, our wonderful honey bee is under severe threat already.

“I’ve seen first hand the damage Asian Hornet‘s can do to a hive; they systematically destroy it and in France, where they are now established, they are an ecological disaster. Since this is an invasive species, our bees don’t have any defences against them – but we can protect them. We can be their defence.”

Asian hornets are also a threat to people, as their sting is very powerful so it could put an adult in hospital. Multiple stings from the hornets have caused fatalities in Europe where they are now endemic.

You can identify an Asian Hornet by it’s very distinct markings – they’re a similar size to a European Hornet, about 2.5-3cm centimetres long, are black with a yellow stripe on their abdomen, brown upper leg with distinct yellow lower leg.

During Stewart’s trip last year to Jersey, he helped local volunteers track and destroy Asian Hornet nests. In a week, the team discovered and removed several nests. In 2019, a total of 83 nests were found on the Channel Island and without the extraordinary efforts of local beekeepers, beekeeping would be impossible on the island.

Stewart said beekeepers across the UK are worried about the potential damage to the environment from these airborne invaders. He added: “It’s heartbreaking to see what has happened in Jersey, and we do not want that to happen in Lincolnshire. If just one nest is missed and not destroyed, then six to ten more will crop up the following season.

“We need to get ahead of this potential catastrophe, now. That’s why I’m calling on everyone to be vigilant, be aware of hornet sightings, look out for nests which are usually high up in trees, and report any sightings.

“We are extremely concerned that they will spread into the UK and Lincolnshire, and if they do it’s vital to eliminate them before they can establish themselves. This is because they are entering a new environment where local wildlife have developed no natural defences, and they can multiply to the point that all honey bees are threatened which is what’s happened in France, Portugal, Northern Spain and now the Channel Islands’.

If you think you see an Asian Hornet or nest, you can do one, or all, of the following:

○ Take a photo on your phone for identification and report it by email: nnss@gov.uk.

○ Each area’s Beekeepers Association has an Asian Hornet Coordinator who can advise or help with identification, which you can find by searching Asian Hornet Action Team Map on Google.

Reporting a possible sighting of an Asian Hornet is quick, free, and easy and has the potential to make a huge difference in the fight against this invasive species.